You know, there are just some activities that surprise you in how well they keep the attention span of those little kiddos in Jr. Primary. When I preparing for this activity, I had a feeling they would like it...but, this activity had every child in that room (almost 60 kids) singing, participating, and reverent when needed. I incorporated it into my Sr. Primary Idea, but it was not the main focus as it was in Jr. Primary. It was a blast. I hope you find it to be as well.
I normally do not provide pictures, but I wanted to make sure you knew that this was actually an extremely easy activity to throw together.
Prep:
1 Giant Red Apple with a hole on one side of the apple. (I made this out of a Heavy Red Poster Board. Draw the shape of an apple, and then cut it out. Use colored paper to tape over the stem and leaf) 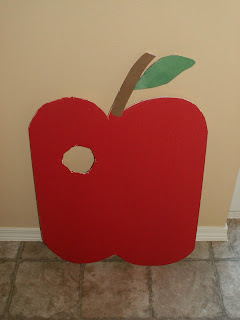 1 Green Worm (I loosely sewed buttons onto one of my husband's scout socks. The sock should cover your arm at least up to your elbow.) 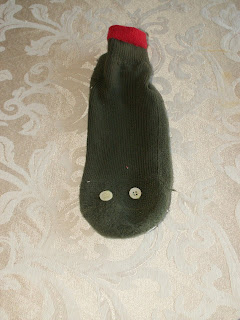 I also brought some stop and go signs, strong/soft signs/boy girl signs.....to help give variety to how we sang the song.
***optional: I just happened to have these worm looking stick figures that were left over in the primary closet from forever ago (I have no idea what they were originally used for). I thought it would be fun for them to be apart of Winston's family to incorporate some wiggle songs in between working on the program songs. I don't have a pattern for them, but I'm sure you could be creative enough to come up with a pretty close substitute. I named them Winifred, Wyatt, Weston, and Wendy. 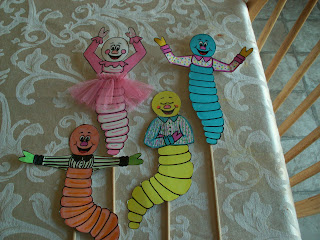 My recommendation is to only work on four out of the eight primary songs. I found that was the perfect amount of time to work through all four songs plus four wiggle/reverent songs.

I began by telling the children how excited I was that it was fall. So many good things happen this time of year. The leaves change, the primary program is coming up, and I get to pick apples off my tree to make applesauce! I told them that sometimes I have the unpleasant experience of finding green worms in my apples. I told them I brought one of those apples today, and it just happens to have a green worm in it. Now, this isn't just some ordinary, run-of-the-mill worm...this just happens to be Winston the Worm. Now, Winston happens to love love love primary music...and when I told him that you were practicing for the up coming program...he told me he really wanted to come and hear you sing. But, Winston is a very shy worm. He usually doesn't come out of his apple unless everyone is reverent, singing their best, and smiling as big as they can so he feels welcome......(you can say whatever comes to mind for you....)

Have the children sing one of the program songs they are really good at. As you notice everyone being reverent and smiling, slowly bring Winston (your hand) out of the apple. I tended to ham this part up a bit....he came out a bit and then shyly went back in a poked his head out a bit and finally came out of the apple and waved hello. Have the children wave back to him. I asked Winston if he wanted to hear some more songs. He nodded and then waved me down to his mouth...I pretended that he was whispering something too me. I turned back to the children and said...Winston really wants to hear you sing...."fill in the blank on whatever you're working on"....and he really loves it when he can hold the Strong/Soft sign. Put the sign into Winston's mouth. Have the children follow his direction.

I could go on, but I think you get the point. Just do what comes natural to you. At one point, I had Winston smile huge (just extend your thumb and pinkie as far as they go)...the kids really loved that and felt good they were making him feel so welcome with their singing. I also had him sing along at one point, but because he's a worm you can hardly hear his little voice....

One little sunbeam jumped off her chair towards the end, came up to me and said, "Winston is just a sock!" I put my finger to my mouth and said, "Shh, he doesn't know that....let's not tell him it would hurt his feelings." She smiled and went back to her chair.

I sometimes had Winston introduce his siblings. Winston would go back into the apple and a sibling would pop out of the hole. Each Sibling had a favorite wiggle they lead the kids in.

Hey folks. Sorry, I didn't get a chance to post this last week. Life is just busy beyond busy.

I'm not sure where I saw this activity idea, but I really liked the concept. It went over really, really well in my primary and the kids really loved it. Here is what I did...hope it helps someone out there.

16 small pieces of paper (8 Jr. Pri - Sir pri) with a question or different way to sing the song.


Insert one paper in each balloon. Inflate. With one of the balloons, insert penny and a slip of paper that says "toss up"

Explain that the program is coming soon and we really need to make sure we know every song a well as we can. To help us do this we're going to have a "Pop Quiz" to help us.

Have one of the boys with short hair come up. Ask him if it would be alright if you used his head for a min. Lightly rub each balloon on his head and attach it to the wall or chalk board. (Just remember that since you have paper in the balloon it is heavier than usual, so this works great on a chalk board where it has the chalk tray to have a bit more support.)

Then call children up one at a time to pop a balloon and proceed to do what the paper suggests. When the balloon with the penny gets popped, tell them it is a "Toss up". Have them call heads or tails...if they get it right they can choose what song to sing or how to sing a program song..or who gets to sing it. If they don't get it, have the pianist play her favorite song and sing that one.

Really, this was such a fun activity....it really held their attention, and we got so much accomplished.

*thecrazychorister
Posted by Melanie at 8:25 AM 10 comments:

The Crazy Chorister is on Facebook. Request to join the group and never miss a new post.

I created this blog to share with you the ideas that I have used in my primary calling. I am so grateful to Heavenly Father for all his help and how he has directed me to help the children in my primary.


I hope you can find an excitement for your calling and a desire to draw closer to Heavenly Father as you prayerfully fulfill this wonderful calling in your ward. Please feel free to share ideas you find on this blog, but please give credit to where you get your ideas or inspiration. Sometimes, after looking for ideas on the web it's difficult to remember who inspired your idea and creativity...but do your best.
Some ideas will mention a partnership with sharing time. These ideas were posted nearly a decade ago when I first created this blog. Since sharing time is no longer apart of primary, simply disregard it. The singing portion can still be used.
I'm excited to be able to contribute to this blog again and share the joy of my favorite calling with all of you.
-The Crazy Chorister

Ideas At A Glance